Has BCM protected shareholder value in the COVID-19 outbreak?

As well as being a terrible human tragedy, and triggering a global economic crisis; the current COVID -19 outbreak provides a unique opportunity to study how different businesses manage disruption, and which approaches are most effective. Specifically, this article, by Patrick Roberts, looks at whether firms that have adopted good practice in business continuity management (BCM) suffered less impact on their share prices during the initial stage of the COVID-19 outbreak than those that haven’t.


The COVID-19 pandemic is fundamentally different in that all firms were impacted simultaneously.  Therefore, instead of comparing changes in the share price of a single affected firm relative to the rest of the market (as per Knight and Pretty); this study is a straightforward (ordinary-least-squares) regression of the changes in each firm’s share price against a range of explanatory and control variables.

Clearly, against this overall decline, different firms’ share prices were affected to a greater or lesser extent; depending on both the nature of their business and the steps that they took to respond to the crisis.  The hypothesis that is tested here is that firms that have adopted good practice in BCM will tend to have responded more effectively to the crisis; and that this will be reflected in a lower impact on their share prices.  Even if firms’ BCM programmes have not included specific pandemic planning, it should be expected that sound generic BCM strategies (eg tried and tested procedures for communicating with staff and customers; plans for coping with denial of access to buildings; and a process for monitoring and responding to disruption in supply chains) would enable firms that have adopted good practice in BCM to outperform rivals in the current situation.

In line with Knight and Pretty’s earlier findings, it is not expected that any effect of good practice in BCM would be observable immediately; but, if there is an effect, it is expected that it would be visible within a few weeks.

The study looks at weekly changes in the share prices of firms in the FTSE 100 (as at 18th March 2020) over a period of eight weeks from 18th February to 14th April 2020.  Four firms were excluded from the analysis because some data were not available, leaving a total of 96 firms.  Share price data were downloaded from Yahoo Finance throughout the period of interest.  There was considerable dispersion in the change in share price across different firms, as can be seen from the summary statistics below at the end of the eighth week:

There is a single explanatory variable in the regression analysis: employment of at least one member of the BCI is used as a proxy for the adoption of good practice in BCM by a firm.  A search of the ‘Community’ database on the BCI website (on 8th April 2020) identified 19 firms in the FTSE 100 that employed at least one BCI member.  It should be noted that this is almost certainly an underestimate, given that not all BCI members have entered their details into the database.  (The BCI provided the author with a full membership list for a study in 2011, which identified that 32 firms in the FTSE 100 employed at least one BCI member at that time).

A number of control variables were included in the regression to attempt to control for the differential impacts on share prices due to the different natures of firms’ businesses.

Beta is a measure of how an individual firm’s share price co-varies with the market as whole over time.  Whilst long-term relationships between share prices may not strictly apply in a crisis, it is still important to include the possibility of some degree of this normal covariance in the model.  Beta values for each firm, calculated over the preceding five years, were downloaded from Yahoo Finance on 20th March 2020.

Dummy variables were also included for three industry sectors: travel and leisure (6 firms), pharmaceuticals (4 firms) and financial services (17 firms).  The travel industry was extremely badly hit by suspension of international travel and, subsequently, restrictions on domestic activities; so it is expected that share prices of these firms would be particularly badly hit.  By contrast, pharmaceutical firms have a critical role in the response to the COVID-19 outbreak; so it is expected that their share prices would be less badly affected than other firms.  No specific predictions are made about any differential impact on financial services, but employment of BCI members is disproportionately high in the sector.  There is therefore the danger that any impact specific to financial services might erroneously be associated with adoption of BCM good practice if there is not a specific dummy variable for the sector.

Much of the observed cross-sectional variation in changes to share price can be accounted for by the control variables.  This is illustrated in the graph below, showing the modelled impact on the share prices of four different types of firm. 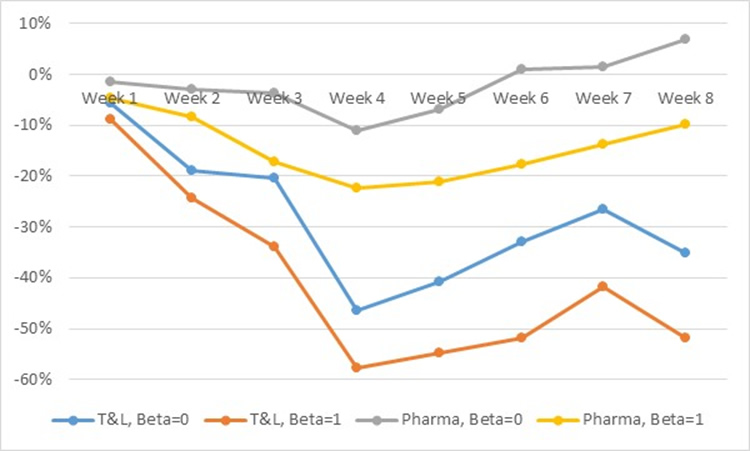 As predicted, firms in the pharmaceutical sector consistently outperformed those in the travel and leisure sector; and firms with lower Beta outperformed those with higher Beta.  However, the regression found no statistically significant association between employment of BCI members and changes in share prices at any point in the eight-week period (nor was there any statistically significant association between the financial services dummy and changes in share prices).

Discussion and areas for further research

The analysis fails to find any support for the hypothesis that adopting BCM good practice, as proxied by the employment of BCI members, affected changes in share prices during the first stage of the COVID-19 pandemic.  That is categorically not the same as disproving the hypothesis; there may be a small effect hidden in the noise (particularly as it is suspected that not all firms employing BCI members have been identified).  Nevertheless, as a profession, it is worth considering some other possible explanations for why the analysis did not find any association.

A potential positive explanation is that BCM good practice is now so widespread that it is impossible to differentiate between adopters and non-adopters of good practice solely on the basis of the employment of BCI members.  That is to say that many BCM managers in FTSE 100 firms who are not BCI members are actually aligning their programmes with BCI Good Practice Guidance/ISO 22313, and implementing these programmes to a similar standard as their peers who are BCI members are doing in other firms.  In order to explore this explanation, it would be necessary to actually perform some sort of audit to compare the quality of BCM practices in a sample of firms including some that employed BCI members and some that didn’t.

A more troubling explanation could be that firms employing BCI members had indeed developed and tested plans and procedures that would have provided a competitive advantage in the initial stage of the COVID--19 crisis.  However, when faced with an event of such magnitude, senior management of these firms ignored these tried and tested plans in favour of making things up as they went along.  This might have happened because senior management had little awareness of the plans that were in place and/or that they had little confidence in their efficacy.  This explanation could potentially be examined through follow-up surveys or interviews with firms that employ BCI members; but it is questionable how candid people would be in admitting that their plans had been ignored.

An even less reassuring explanation would be that firms that had adopted BCM good practice did implement their pre-prepared plans; but that these provided little or no benefit in dealing with COVID-19.  This could be, for instance, because the plans were based upon assumptions that did not hold up in the current crisis; because they required resources that were not available in a pandemic scenario; or because they were dependent on the availability of timely and accurate information on the progress of the disease.  Once again, this explanation could be examined through follow-up surveys or interviews with firms that employ BCI members.

Of course, in reality, the failure to find an association between adoption of good practice in BCM and changes in share prices could have resulted from some combination of all of these possible explanations (and indeed others).  However, those that dispute the value of BCM (and there are still many of these people around) will not concern themselves with these subtleties; they will simply seize on the fact that adoption of BCM good practice had no measurable effect in mitigating the impact on firms’ share prices during the initial stage of the COVID-19 crisis.  If we, as a profession, are to own the resilience narrative; we need to quickly explore the various possible explanations outlined above, acknowledge where mistakes have been made and, most importantly, demonstrate that we have learnt from this experience.

Patrick Roberts is a Director of Cambridge Risk Solutions Ltd.